Once a privilege in Okinawa, sweet treats have become a source of joy for Japan natives and tourists. This island is home to over 1,000,000 people and has a reputation of possessing the longest living peoples of the world. While we can’t guarantee that their abundant selection of sweets is the reason why their residents live so long, we are certain that it contributes to the island’s general happiness! The Ryukyu Dynasty contributes greatly to Okinawa’s large collection of sweets, called the Ryukyukashi. This collection was made with the influence of both the Japanese and the Chinese. 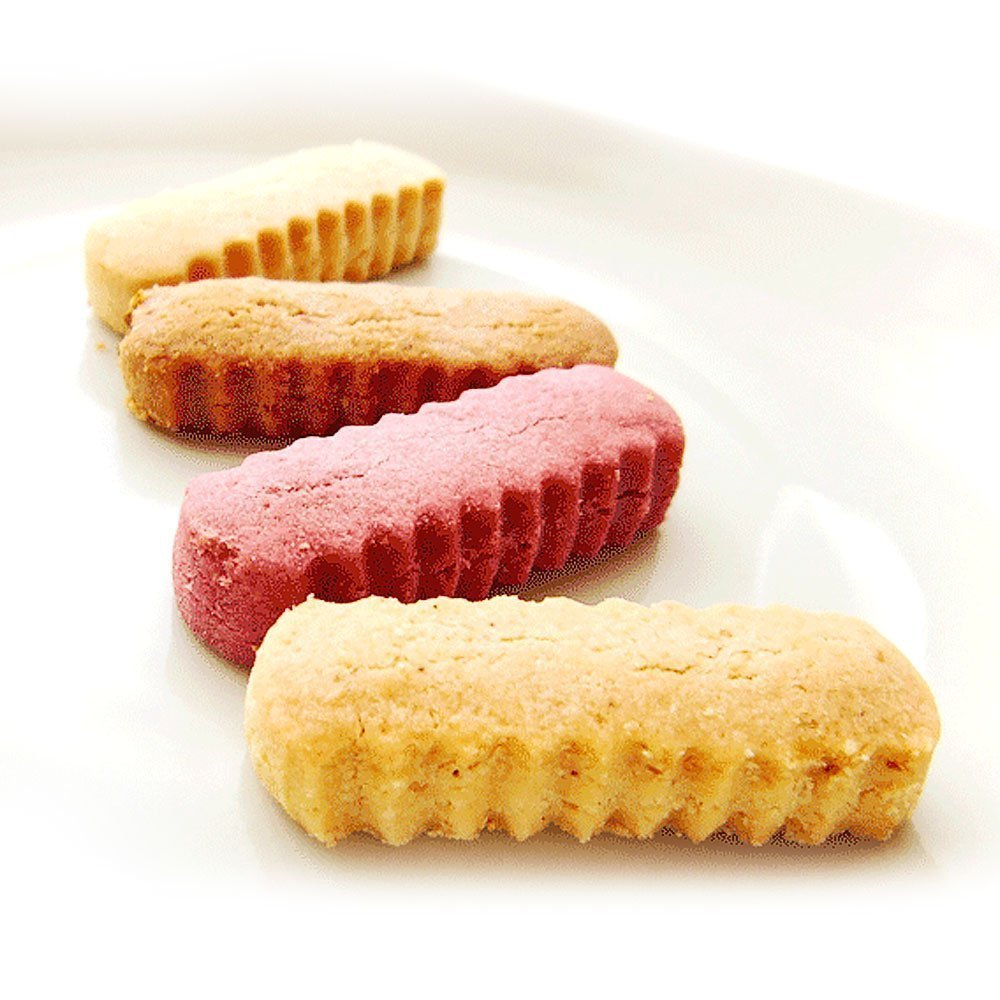 Since the Ryukyu dynasty, chinsuko has been a favorite among Japanese locals. Historically, it was only eaten by royalty during celebrations. It is essentially a crispy shortbread cookie made of flour and lard, instead of butter; it often comes in other flavors like brown sugar, sea salt, purple yam, coffee, and milk. One of the most popular flavors of chinsuko is “snow salt” or Yuki Shio. It has a memorable crispy texture that crumbles in your mouth when you bite it. You can find these at your local grocery or convenience stores, and not to mention, in most Japanese households! 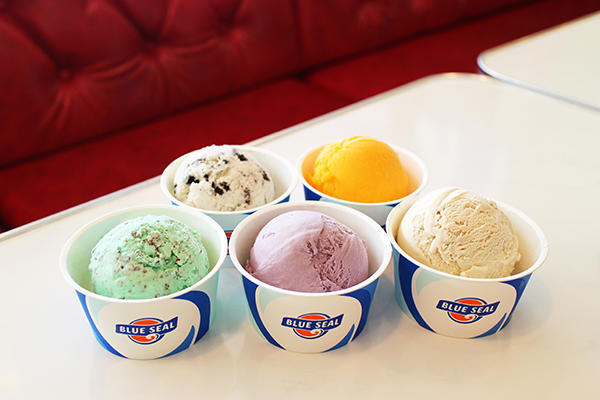 You’re missing out if you’ve never heard of Blue Seal Ice Cream. It’s a Japanese ice cream brand, significantly popular in Okinawa, that delivers flavors like Okinawa salt cookie, Goya bitter melon, and purple sweet potato, or beni-imo. They have over 30 varieties of flavors, both classic and limited, so you won’t leave empty handed.

The interesting history of Blue Seal Ice Cream is that it was made at the close of World War II as a morale boost and a sense of nostalgia, particularly for American soldiers stationed in Okinawa. They have various stores located all over Okinawa, so you won’t need to travel very far to find one. You’ll hear about Blue Seal a lot; it’s so often referred to as the best ice cream in Okinawa! 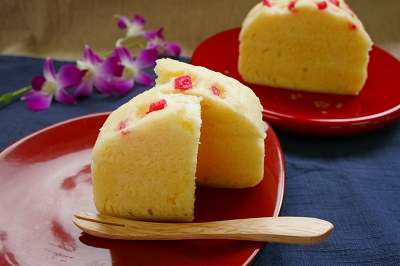 Chirunko is defined as a steamed sponge cake, a traditional Okinawan dessert made with plenty of eggs. People often serve this with red colored peanuts and kippan on top for more flavor. Back in Okinawa’s past, only nobility would have access to such a treat, but now anyone is welcome to make and eat chirunko. This dish is best described as nutty, citrusy, and moist, and when made with brown sugar, has a molasses-like taste. Locals enjoy these during celebrations and you should too! 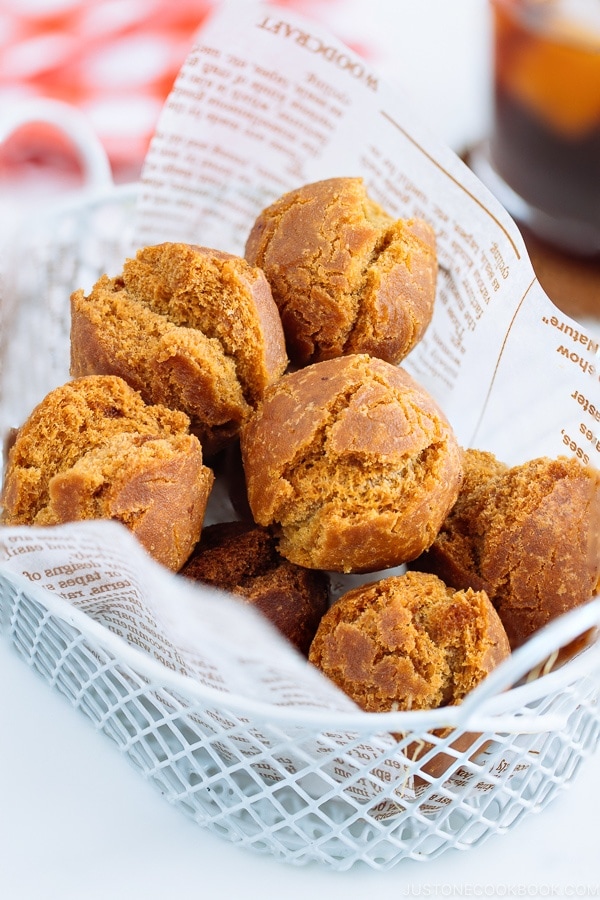 Sata Andagi is a tasty donut-like dessert, made by frying a combination of eggs, flour, and sugar rolled into a ball, meant to be more dense in texture than conventional western donuts. The shell is nice and crispy and when you bite into it, you’re welcomed by the fluffy center. This is a native food to the Okinawa prefecture and is loved by both children and adults. Though difficult to obtain for being a prized sugar, many throw Okinawa brown sugar into their Sata Andagi for maximum flavor. The techniques used to create this confection can be traced to Chinese and Japanese practices.

Of course, the simple original recipe is an excellent dessert to top off any meal, but it does come in other flavors, including coffee, purple yam, and pumpkin, when you want to spice things up.

Popular in the wintertime but eaten all seasons, Zenzai is an elegant dessert, particularly a sweet soup, made with mochi and shaved ice in a thick red bean soup. The red beans are boiled to create a jam-like texture and the frozen broth of the red beans is used to make the shaved ice. This dessert is just sweet enough, offering earthy and mature tastes. You can also find zenzai in other flavors, including beni-imo and matcha. Also, this treat is normally accompanied by sour foods to contrast the zenzai’s sweet flavors. 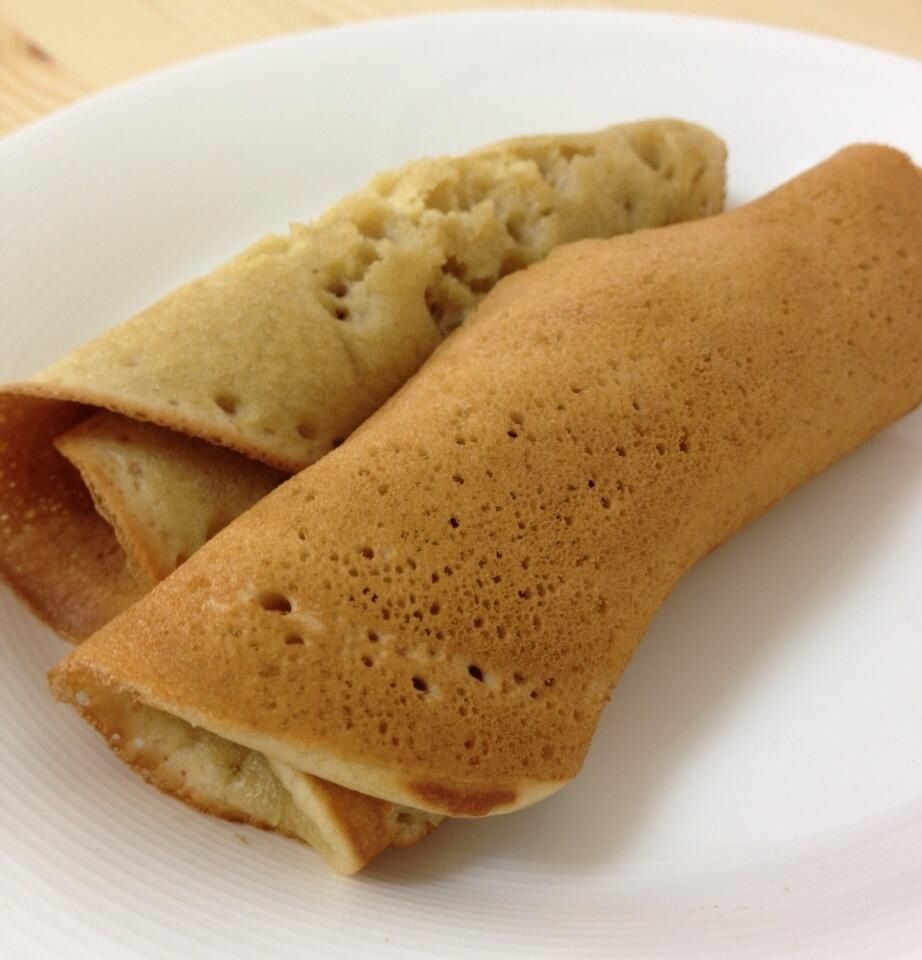 Chinbin is a traditional rolled up Okinawan crepe that dates back to the Ryukyu Dynasty. This Okinawan sweet has rather simple ingredients so you can make it at home; it’s made of brown sugar, wheat flour, glutinous rice, baking powder, and salt. It often comes in its own prepackaged mix at supermarkets Chinbin is normally served to children in early May on the Lunar Calendar.

This wouldn’t be a proper guide without mentioning the importance of the superfood Beni-imo, a kind of sweet potato, marked by its signature vibrant violet color. Beni-imo itself is a signature flavor found in Okinawa’s ice cream, cakes, and brownies, but the Beni-imo sweet potato tarts are the true staple to Okinawa’s dessert menu. They have a cute diamond-like shape defined by the piped sweet potato cream. You can find them at the Okashigoten Onnason Store, a store that houses many sweet potato confections. They provide a unique opportunity for you to make your own tarts! It’s so immersive and needless to say, delicious! 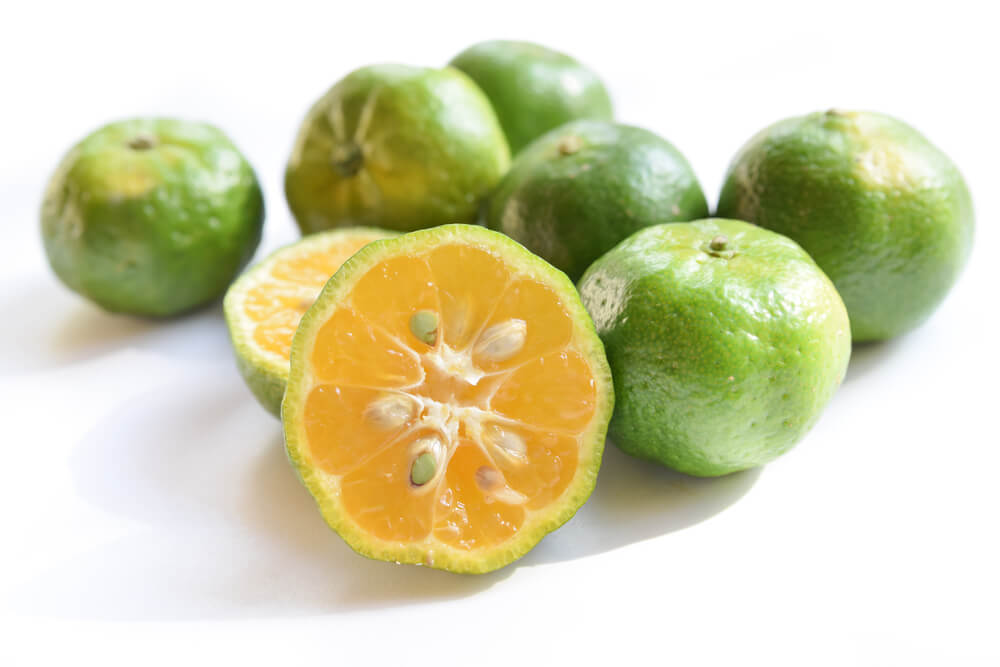 Shikuwasa, or “citrus depressa,” is an awesome power fruit popular throughout the whole island of Okinawa. It is teeming with vitamins, especially Vitamin C, and health benefits to help metabolism and fat regulation. This sour fruit is produced into a tasty drink, rich in citrus and sour flavors, that you must try in Okinawa! The taste of shikuwasa can also depend on the seasons you’re drinking it. Between July and October, they are dark green with exceptional sourness, whereas between November and January, they are quite yellow with sourness and a mild sweetness.

Wagashi is a Japanese chewy rice cake made from plant-based ingredients best enjoyed with a cup of green tea. What’s great about this treat is how versatile it is; it comes in many different shapes and tastes. Some variations include Namagashi and Daifuku. Its main ingredients include azuki beans, sesame paste, chestnuts, Japanese agar, mochi, sweet potatoes,fruits, and rice flour. These are typically eaten at restaurants, gardens, and temples.

This traditional dessert has been around since the Ryukyu Dynasty. The Japanese Kunenbo mandarin is used to create this treat, and actually takes about four days to make; it does take a lot of work to make. Because of this, kippan is hard to find, in general. The only place remaining that carries out the process is Jahana Kippan-ten. Kippan definitely has a more mature taste for a dessert, dark and rich. Eat this with your favorite wine or tea and you’ll be eating like royalty! 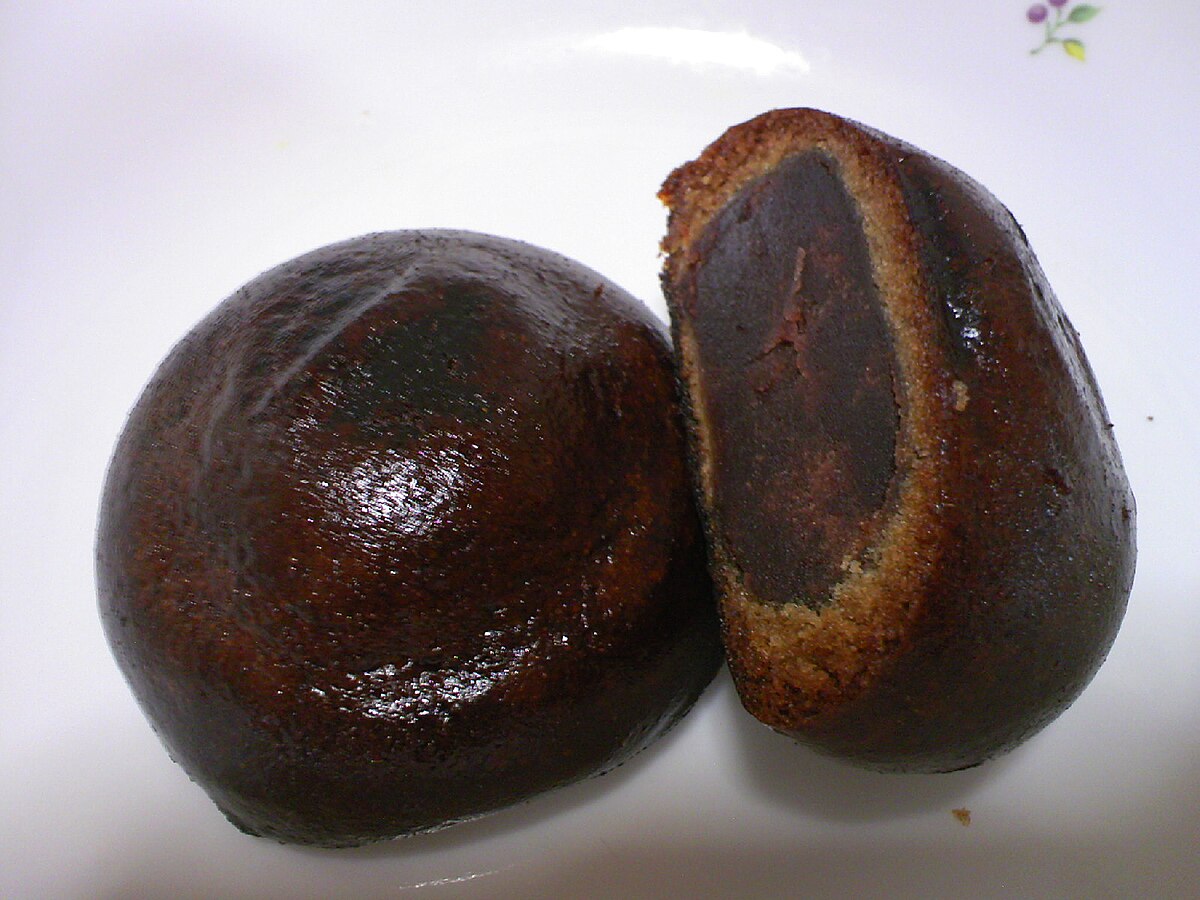 Manju is a type of mochi made Japanese-style; it also falls into the wagashi category! Its creation was influenced by China’s pounded mochi: mantou. They are often steamed with shell ginger leaves. It has a cookie-like exterior made of pounded rice flour dough with flavored fillings on the inside, and you can find them served warm; it’s best to eat them fresh for maximum taste. It even comes in different flavors, such as sweet potato, sesame, and red bean. 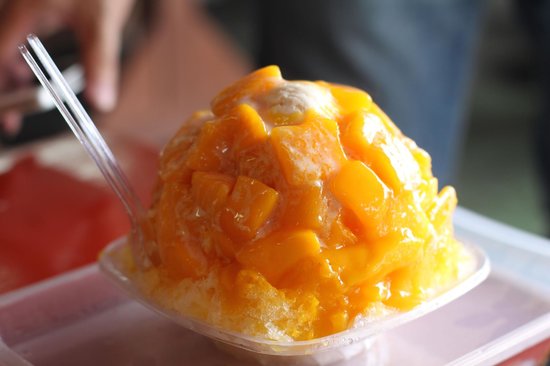 We know, we know. Shaved ice didn’t originate directly from Okinawa, but if you’re in the area, the shaved ice served at Ryu-Pin is unforgettable. Offering a slew of ice cream flavors and seasonal fruits, Ryu-Pin is known for their mountain of shaved ice, dripping with ice cream, local fruit, sweetened condensed, and other toppings. This yummy dish is popular for not being overwhelmingly sweet; it’s just right for when you need to satisfy your sweet tooth. Some popular flavors include strawberries cream, passion fruit, and mango. This dessert is so huge that it is often shared with friends and family.

Food fanatics that discovered our love for food and travel while touring the world in a rock band. We share our favorite food tips, tools, and recipes to help you make better food creations at home!